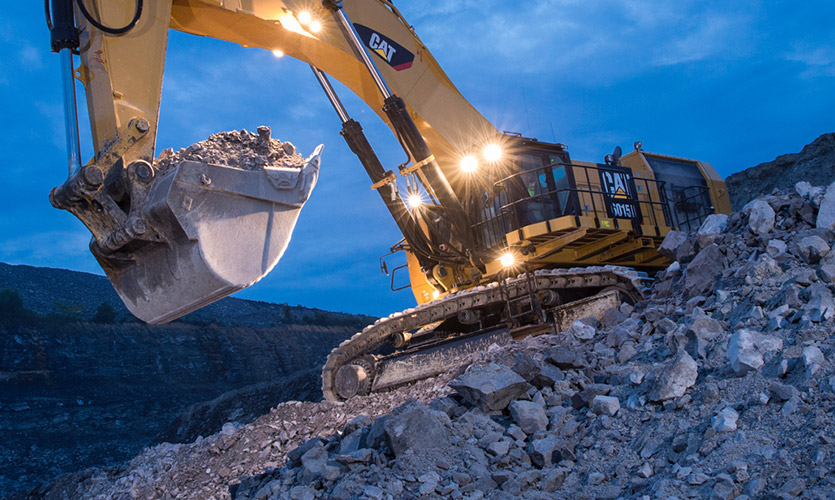 Compared to the world’s population, a relatively small percentage of people get to witness the capability of Caterpillar® machines, from their massive power to their delicate precision. That’s one reason Caterpillar recently launched its Built For It™ trial series.

Built For It Trial No. 1: The Stack Tower 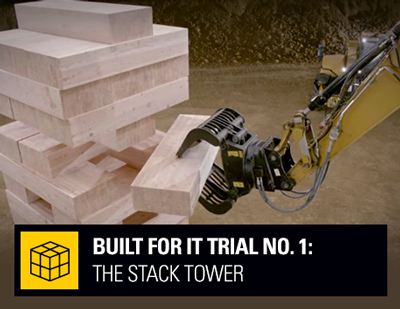 For example, Built For It Trial No. 1, the Stack, resembles a large-scale version of the popular game people play on their coffee table with friends. Caterpillar held the stack challenge in a test facility in Edwards, Illinois, using 27 blocks that weighed 600 pounds each. Skilled operators proceeded to push, pull and pile a total of 8.1 tons of wood from a nine-level stack into a 15 level stack.

The challenge involved a combination of brute force and gentle touch to demonstrate the extreme controllability of Cat® machines and their attachments, including:

Built For It Trial No. 4: The Sand Castle 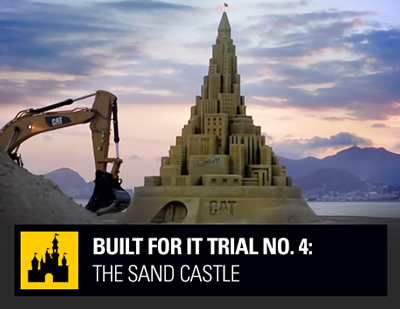 Another impressive example is Built For It Trial No. 4, the world’s tallest Sand Castle, built in Rio de Janeiro, Brazil, and certified by the Guinness Book of World Records at 41 feet, 3.67 inches tall. The challenge demonstrates that Caterpillar brings not only the sheer power to dig and carry the sand but also the precision and accuracy to pile it high, compact it and sculpt its perfectly shaped features.

Big and small machines helped master the challenge, including:

Built For It Trial No. 5: The Lantern Festival 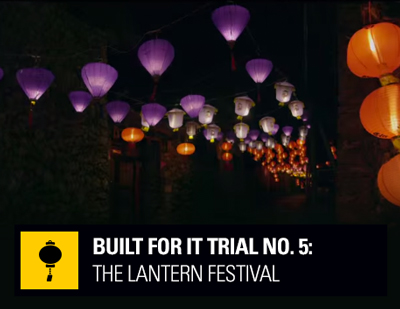 Built For It Trial No. 5, the Lantern Festival, demonstrates Caterpillar delivers power wherever it needs to go, including to the people of the Yuhu Village in China living at an altitude of 7,900 feet. Cat trucked one generator up the mountain to produce 252,000 watts of power and light 8,840 lanterns.

Roots of the Lantern Festival can be traced back 2,000 years. Very important to the Chinese people, it marks an end to the Spring Festival, commemorates the Chinese New Year, and symbolizes prosperity and good fortune.

This trial shows how Caterpillar “brings it” for a delightful purpose in the same way it has to address the bleak challenges of massive blackouts, power failure and backup electricity needed for all kinds of private and commercial situations.

You can check out Caterpillar’s other Built For It Trials here.

Industry News From Warren CatRight To Your Inbox

Displaying massive power and astounding capabilities is nothing new for Caterpillar. For over 85 years, Caterpillar has been building some of the world’s largest and coolest equipment and world wonders. Here is a look at some of Caterpillar’s top projects throughout history.

Warren CAT delivered in early April 2015 a custom-built Cat CT-660 truck that enables New Mexico’s Quay County Fire Departments to battle blazes better and more efficiently than ever. The new Class 5 wild land fire truck allows unprecedented versatility to reach and quench wildfires in rural areas, plus offers the versatility to help firefighters do their job in urban settings, too. 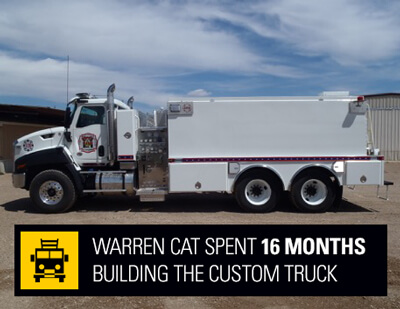 Warren CAT spent 16 months building the custom truck and making sure it conforms to all the requirements listed in the National Fire Protection Association’s book of standards for wild land fire apparatus.

You have to buy the book to see all the NFPA’s specifications, but the National Wildfire Coordinating Group lists a few of the musts for such trucks:

Quay County’s newest vehicle is the third such fire truck Warren CAT has built, and the fire departments will strive to add a Cat all-wheel drive fire engine to the fleet in coming years to give it more off-road firefighting access to remote locations.

There is practically no limit to the specialization Caterpillar can build into and onto a Cat CT-660 chassis for any vocation. Jaime Duenas of California Fuels and Lubricants says it’s one of the best trucks he’s driven in a long career.

CFL’s workers say the Cat trucks handle more like a new car, with superior steering on any grade and surface, even with the loads of fuel they haul that naturally move around during transport. CFL’s owner says he runs the trucks 10-12 hours a day, six days a week, and that Caterpillar has figured out how to make it easier for drivers to drive.

The CT-660 masters a multitude of vocational challenges with power, performance and features needed across many types of businesses, with these features:

Caterpillar power and innovative technology makes progress possible, and not just lately. For the past 88 years, Cat dozers, trucks, power solutions and many other types of equipment have done the hardest jobs in some of the harshest climates from the hottest to the coldest on Earth.

Caterpillar’s impressive history speaks for itself.

When the worst happens, those devastated by it have called on Cat equipment such as the biggest Cat dump trucks and the largest Cat dozers to help them recover from the most unbelievably destructive natural disasters and other events:

Tsunamis — Caterpillar machines have helped with reconstruction following many tsunamis throughout history and continue to be a big part of the recovery efforts following the 2004 tsunami in the Indian Ocean that devastated the entire region.

Floods — 1950 in Canada; 1953 in the Netherlands; 1964 in California, Oregon and Washington; multiple years in the aftermath of hurricanes, tidal waves and tsunamis; 1993 along the Mississippi; and many flood-control projects in various watersheds.

Fire — Cat machines have helped fight flames ignited by many natural disasters around the world, and helped extinguish what is perhaps the longest, most infamous fire event after Coalition forces liberated Kuwait in 1991, when 750 oil wells were set on fire.

Bombing — Cat equipment helped clean up the devastating effects of the 1993 bombing of the Alfred P. Murrah Federal Building in Oklahoma City.

Caterpillar machines have been a part of some of the biggest, most ambitious construction projects in the world, including:

Here are some examples of places where Cat machines have helped reconstruct cities and buildings:

Cat machines were sent overseas to England, France and Russia for agriculture from 1914-1918, and the governments put them to work assisting troops to haul equipment and weapons.

Caterpillar pitched in for the war effort from 1941-1945 to produce 51,000 track-type tractors by doubling its workforce and running factories seven days a week.

NASA counted on Cat engines in 1969 to power communications between Houston and the worldwide tracking stations that enabled Apollo 11 to land safely on the moon and for people everywhere to hear astronaut Neil Armstrong’s famous words.

Caterpillar produced the first tractor to climb the famous mountain and reach its summit at 14,109 feet in 1919 and to operate at that altitude.

Cat machines helped excavate 3.7 million cubic yards of rock in the mid-1930s to make way for the astounding dam that is 1,244 long and 726 feet high.

Caterpillar machines helped construct this engineering wonder that has become an American icon.

Engineers and researchers look to Cat equipment for assisting with projects in Antarctica that began in the 1950s and continue today.

Cat equipment helped pave the way, literally, for the 42,800-mile U.S. highway system that allows motorists to drive east-west from coast to coast or north-south from lowest to highest tip.

Caterpillar made other new routes available as it helped build the 1,600 miles of Alaskan Highway, sections of the Autobahn, the Pan-American Highway that links North and South America, and the superhighway through the Andes Mountains in Venezuela.

Cat machines helped build the massive complex in the 1960s and 1970s, then played a huge role in recovery after terrorists bombed it in 2011.

Caterpillar completed major tasks for this Australian project that took 25 years to complete and involved 16 dams, seven power stations and 140 miles of tunnels, pipeline and aqueducts.

Cat machines made way for this 1,100-mile, extra-high-voltage transmission system that stretches across Zaire, Africa.

Europeans needed the best heavy equipment to create a 32-mile underwater rail tunnel between the coasts of England and France, which when finished shortened travel time to a small fraction of what it had been by ferry.

While many types of Cat equipment help get the job done, the most massive, crazy-big machines continue to amaze those who see or hear about the jobs, as well those who use the equipment.

As big as the 797F is, the service points sit grouped at ground level for easy access. Operators board it with wide, powered stairs, and the cab features ergonomic controls for excellent all-day comfort.

You can customize the truck to fit your application with a range of optional equipment:

The D11T is the biggest of the track-type dozers and brings sheer power with sophisticated characteristics to tackle any job. The mammoth D11T even works by remote control if you’re in places too dangerous for a human operator, and its features dominate hard work. They include:

The selection of work tools for any wheeled or tracked dozer can help you pound, dig, rip, scoop, lift, grade or do just about any other task needed. The D11T blades have a high-capacity universal blade to carry large loads far. A semi-universal blade penetrates the most challenging of materials, and operators can adjust the blade-pitch angle with dual tilt. Caterpillar makes the bit ends and cutting edges for a long and productive life from its trademark DH-2 and DH-3 steel.

Rippers come in single- or multiple-shank options that can adjust to the depth you need using a single pin. Big, single-shank rippers are also available for the deepest depths, and the D11T has rear counterweights to give you superior balance (and safety) as you work.

All You Need in a Machine: Talk to a Sales Rep Today

From the most monstrous mission to the most delicate and sensitive tasks, it’s easy to confirm Caterpillar machines as the best. Contact Warren CAT to find out more about the equipment that will help you master whatever big or small challenges you may have.

Customer Value Agreements — What They Are and Why You Need One