Consequently, the companies that get hit with equipment theft can be burned at both ends. They often have to set aside huge sums of money just to replace the stolen items. There’s also the issue of downtime due to the lack of needed equipment, which results in lost revenue. Companies with theft problems can also sometimes look bad in the eyes of funding agencies.

Construction equipment theft prevention has become a growing concern among fleet owners as more machines disappear from worksites across the country. Even though equipment theft is common and recoveries are rare, there are steps that you can take to decrease the odds of theft occurring on your fleet.

The market for equipment theft is due to several factors, including:

Industry News From Warren CatRight To Your Inbox

In a nutshell, equipment theft is driven by easy access and resale value. Any piece of equipment that has a lucrative brand name, is relatively new, and can easily be loaded or driven off could be considered an easy target for theft at any given worksite. Contrary to popular belief, thieves are not deterred by sites that house government vehicles.

2. Give Each Vehicle a Recognizable Indicator

With worksite equipment, you’re not required to have registration or titles. As such, it could be tempting to simply pass on putting labels or numbers on each piece of machinery for the purpose of identification. However, when you don’t mark a given piece of equipment with an identifier, it could be very difficult, if not impossible, for law officers to recover in the event of a theft.

Therefore, it’s important to place identifiers — such as names, symbols or digits — on each piece of heavy equipment at your worksite; this can be done via stamping or engraving. Better yet, apply an identifier to each equipment part that could possibly be removed and sold separately on the black market.

3. Keep Records of All Equipment

On most equipment, serial numbers and PINs are either nonexistent or non-standardized. Consequently, a thief can clear away the identity of a stolen piece of equipment by simply having it swapped or wiped. For that reason, it’s crucial to familiarize yourself with the make, model, PIN, serial number, and production and purchase dates of each unit or component part, and to keep records of all this information on file.

It’s furthermore wise to keep photo files of everything in your fleet for identification purposes in case anything is ever stolen. As anyone who has dealt with law enforcement on the recovery of stolen equipment will know, it’s crucial to have the nomenclature of the missing item on hand so the National Insurance Crime Bureau can track it down. The lack of this vital info in so many equipment theft cases is the reason why recovery rates are so low.

While it’s important to look after all the equipment in your fleet, you should be especially protective of the types of items that are commonly targeted by thieves. In the Northeast U.S., for instance, the most frequently targeted worksite vehicles include tractors, skid steers, and snow-removal wheel loaders. In the Western portion of the country, thefts of backhoe units have been on the rise.

In the past, breaker/hammer attachments have been a common target among thieves, and while the trend has dipped, such equipment should still be protected with utmost diligence. With improved awareness of trends on the black market, it’s easier to point out suspect behavior the moment it occurs within a fleet. But regardless of what items are most or least likely to be targeted, don’t allow trends to serve as a fake indicator of whether or not a given item is vulnerable to theft.

5. Secure Your Fleet from Intrusion

Due to the remote settings of most construction worksites, the equipment left overnight at such locations is often seen as open prey by thieves. The problem has actually been enabled to some degree by the fact that many of these sites don’t even have proper security. In order to lower the risk of your fleet being targeted, it’s important to strengthen your yard, so to speak.

The measures that could make your fleet more secure don’t need to be costly or complex; in many cases, a locked fence, motion sensors, and some practical nighttime procedures will do the job. Here are three ideas:

If your site looks even slightly more secure than average, a lot of thieves will skip it for a more vulnerable location.

These days, technology plays a vital role in preventing heavy equipment theft. A digital, wireless video system can add clear and interference-free nighttime security to any worksite location. Depending on the system, you could have it set up to record continuously during off hours, or have the cameras programmed for motion activation. You might choose to have a single camera monitor several different locations, moment-by-moment, or have several cameras attached to the same system — with one placed in each of the corners of the equipment-storage area. With most modern systems, the wiring is simple. You simply plug the cameras and receivers into outlets.

If there’s a lot of equipment to be accounted for in your fleet, it might be prudent to install a light tower on the premises. Some light towers will hoist as high as 30 feet, beaming light around a worksite at 360-degree rotations. The rotating beam of a light tower could be intimidating for any aspiring thief, because the beam would be spinning around and draw attention to any given spot at any random moment.

Depending on how much you’re willing to invest in the overnight security of your equipment, an onsite security guard could be invaluable. Some worksites hire their own security personnel, who sometimes learn on the job and only possess minimal capabilities. Other worksites hire security guards from private companies, where guards are trained for emergency situations and are licensed to carry weapons. Some guards even come from police or military backgrounds, and have extensive training in handling armed theft and other emergency scenarios.

Of course, it takes a certain kind of person to work an overnight shift. He or she will need to adjust to a nocturnal schedule, which can have its own issues due to the social limitations that this type of lifestyle can impose on an individual. A guard with daytime experience might need special nighttime training to know how to monitor intrusions, theft, and other illegal activities that occur in the dark. It’s also important for a guard to know local police protocol, especially in the event of a major, multi-man break-in or theft that could require emergency backup. Whether or not you choose to employ armed guards, they may still need to be licensed to drive commercial vehicles depending on the overall scope of the job.

At any worksite location, employees and equipment operators can do their part to ensure the security of equipment on site. It’s important to train them on the aspects of security that might not be obvious from their general area of expertise, such as spotting suspicious activity on the premises. For their part, operators should log each used piece of equipment at the end of each shift, and park all vehicles securely according to site protocol. Each operator should also be aware of the unique identifiers on otherwise identical vehicles.

9. Move Your Equipment to a Safer Location During Off-Hours

If you’re unable to setup any of the aforementioned safeguards like fences, surveillance or a deal with local police patrol, look for a safer storage area within driving distance from your worksite. While it could run you a bit more in terms of gas money and shutdown/startup time, it’s worth the extra effort when it comes to preventing theft.

10. Immediately Report a Theft Upon Discovery

In any given theft scenario, notify police the moment it comes to your attention. Belated reports of stolen equipment are the primary reason why so few items are ever recovered. Therefore, the quicker you report the theft of one of your worksite vehicles, the likelier it will be recovered by investigators.

If you find your fleet hit by an equipment theft, take the four following actions as soon as possible to improve your odds of recovery:

Remember, the success of a theft investigation can largely depend on how soon an item is reported missing and how much information is given to help it get identified.

11. Make Theft Prevention One of Your Top Priorities

Putting a reasonable amount of time, focus and investment in the areas of theft prevention can spare you plenty of downtime, headaches and lost revenue down the line. As any veteran fleet manager will attest, those who give security the same level of priority as other business concerns will always be on top of the game.

In other words, don’t wait for some costly theft to serve as your catalyst for becoming proactive on the theft-prevention front. Take steps now to prevent theft from occurring and have a tracking system in place in case one does occur; the little amount of money and energy you invest in these things upfront could pay off big in the long run.

In addition to site security, steps can be taken to better protect each individual piece of equipment. This can be done with the activation of wheel locks, shut-off systems, battery switches, ignition locks, and other hidden deactivation devices. Whenever a given piece of machinery won’t be in use, consider removing its circuit breakers and fuses.

This is not to say that deactivators serve as foolproof theft preventers; while the aforementioned options can thwart a lot of attempts, skilled thieves will sometimes know their way around such deterrents. But when a vehicle is stolen, it’s much likelier to be found when linked to a GPS tracking system, which would give police the ability to pinpoint the vehicle’s whereabouts.

If you’re looking for a product that will make it possible to track the productivity and whereabouts of the vehicles of your fleet at all time, the Cat VisionLink® will have you covered. With VisionLink, you can view a vehicle’s fuel usage, idle time, movements and location from any computer, laptop or digital handheld.

Equipment Theft Stats and Trends Across the U.S.

According to the 2012 NICB report, the four most frequently stolen equipment categories ranked as follows:

Of all the stolen equipment, 48 percent was less than five years old. Thieves stole equipment from numerous brands during 2012, but items from the following six equipment makers were targeted most frequently:

According to further data in the 2012 NICB report, the top ten states for equipment theft, which account for 61 percent of all such thefts, with 37 percent occurring in the top four, were as follows: 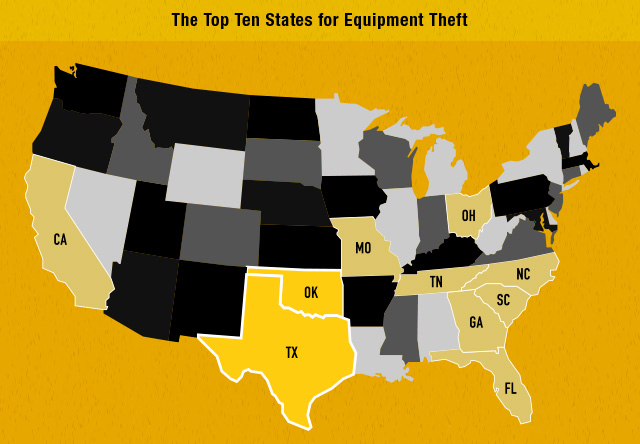 It’s relevant to note several of these states either have international borders or crucial shipping ports, while most of the 10 states have high percentages of active construction sites.

To learn more about VisionLink and other products for preventing construction equipment theft, large and small, contact Warren CAT today.